Mayors get on-site information about electronic locking systems and their various possible applications in different sectors. 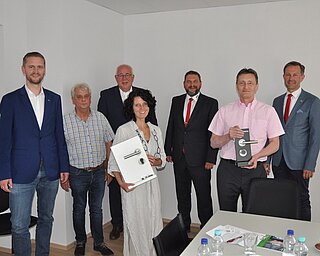 Representatives of the local authorities in the Volkmarsen district now visited OPERTIS in its new business premises in Volkmarsen and saw for themselves the possibilities offered by the product portfolio. OPERTIS moved from Bad Arolsen to Volkmarsen only six months ago and has settled in at the new location. Sales Manager Petra Kroha and OPERTIS Development Manager Andrzej Burski informed the interested local politicians in detail about the possibilities of electronic locking systems with fittings and cylinders from their own development and production.

The mayors Hartmut Linnekugel from Volkmarsen, Marko Lambion from Bad Arolsen, Stefan Dittman from Twistetal as well as Dieter Oderwald, city councillor in Diemelstadt, and the managing director of Nordwaldeck AG, Dominik Wohl, were impressed by the possibilities of the electronic locking and opening processes and had them explained to them in detail. Since the Volkmarsen municipality owns an OPERTIS locking system, Mayor Linnekugel was able to inform his counterparts first-hand about its advantages.

The active sales manager had already introduced the gentlemen to the company itself, part of the primion group in the Azkoyen Group with headquarters in Spain, in an informative presentation. OPERTIS has been part of the group since 2016 and has already acquired numerous well-known new customers from almost all sectors during this time.